Recently Canada Wood technical expert Neriko san and I visited the Polus R&D Center of Lifestyle to learn about a new proprietary shear wall product that they have developed named TS WALL HPW, constructed using Canadian OSB. This company is part of the Polus Group, which includes Polus Tec, one of the largest wood pre-cutters in Japan.

With people living longer and spending more time at home, the chances of experiencing a large earthquake while in their residence are growing, increasingly driving potential home purchasers to look for a very highly seismically resistant house. However, to achieve this usually requires increasing the number of walls in the house, which limits design flexibility and makes the living space smaller. To solve this, the R&D Center developed and tested several shear walls using different structural wall panels, including plywood, Particle Board, MDF and OSB. Test results showed that due to OSB’s superiority in plane shear strength, they were able to achieve a wall multiplier value of 17.5, reportedly among the highest levels ever achieved in Japan.

TS WALL will be produced by one of Polus Tec’s pre-cut plants near Tokyo and supplied to one of their group company’s, Global Homes. Global Homes produce about 500-600 platform-frame (2×4, 2×6) custom homes per year and the TS WALL will be offered to customers looking for a more durable, highly seismically resistant home. Further, by using this product fewer walls are required so larger interior spaces can be created.

The posts, beams and sill plates use a 4×6 hybrid glu-lam product made from Douglas Fir and Japanese Sugi, while the Canadian OSB applied to both sides of the wall is 3×8, 9 mm wall sheathing. According to staff, they are working on a similar shear wall product for P&B homes. 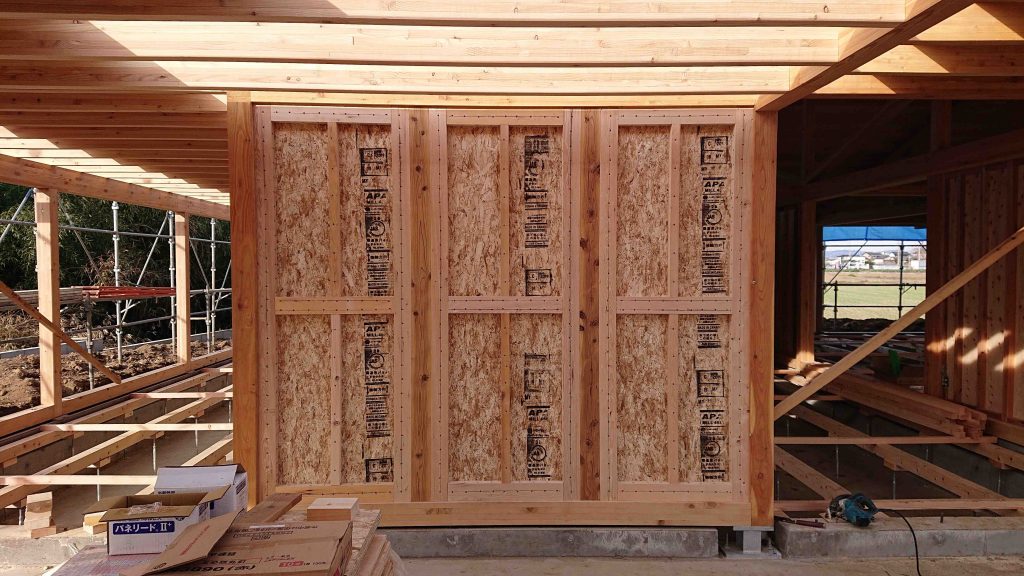