The National Sliding Centre at the 2022 Beijing Winter Olympic Games

The closing ceremonies of the 2022 Beijing Winter Olympics marked the culmination of a tremendous amount of work to prepare the facilities, the city, and the local residents for one of the largest international sporting events while the world still wrestled with the Omicron variant of COVID-19. With lessons learned from the 2020 Tokyo Summer Olympics that had been postponed to 2021, the Beijing International Olympic Committee worked hard to ensure that the Winter Olympics could move ahead as planned, notably on schedule.

The city of Beijing hosted the Olympic bubble; a walled village within the city that was tightly monitored to control the potential spread of COVID-19. For the Olympians travelling to Beijing, they were required to be fully vaccinated at least 14 days before arriving to avoid quarantine. The only exceptions for the vaccine requirement were if an athlete was allergic or was using any immunosuppression medication. In that case, they needed to undergo the standard 21 days of quarantine before being allowed into the closed-loop system of the Olympic bubble. Before boarding their flights, athletes, coaches and their staff had to provide two recent negative polymerase chain reaction (PCR) tests, and on arrival, they underwent daily screening and testing.

During a press conference, Dr. Brian McCloskey, chair of the Olympics medical expert panel, said the goal was “zero spread” and not “zero cases.” Anyone who tested positive were moved out of the games and the Olympic Village, and dozens of athletes underwent these isolation requirements after testing positive. Individuals were not allowed back into the closed-loop system until all symptoms cleared and they tested negative twice in a row with tests taken 24 hours apart.

A total of 2,871 athletes participated in 109 events across 15 disciplines of seven sports over the two weeks of the competition. A fleet of designated buses and trains moved participants between training venues, competition venues, victory ceremonies and the Olympic Village, where most of the athletes stayed. Thousands of personnel in full protective gear supported the daily testing requirements and were successful at preventing the spread of COVID-19 outside of the Olympic bubble.

For those following the wood construction industry, one of the most interesting facilities was the National Sliding Center, located at the southern foot of Xiaohaituo Mountain in the Yanqing District of Beijing. Designed by Li Xinggang, the Chief Designer of the Beijing National Stadium, the project featured a red cedar roof that covered 1974 meters, with 16 curves that had different angles and slopes. The track included a vertical drop of 121 meters, equivalent to 47 floors high, and a maximum design speed of 134.4 kilometres per hour.

For the selection of materials, Liu Ziqi, the professional designer of the National Sliding Centre, said “the National Sliding Centre is a Mountain Forest Architecture, so we chose materials that are more suitable for Mountain Forest Architecture to fit the venue’s echo.” The sunshade roof of the track adopted a single-sided overhanging steel and wood hybrid structure, achieving a balance of traditional wood structures and modern steel structures. This was used to ensure that each section of the track is not affected by direct sunlight, to protect the racetrack from exposure to the weather. The wooden beams used in this project were all made from Glue Laminated Timber (GLT) supplied by Suzhou Crown Homes, with the largest section being over 15 meters long and over 3 meters high, and the thinnest single piece measuring 120 mm. Given the complexity of the design, almost every component was made with a different size or shape.

The National Sliding Center will be a facility for ongoing professional training and competition for athletes from across the world. It will also provide the public with a unique experience of winter sports, to help promote the development of winter sports in China. China’s “snow and ice industry” is estimated to have expanded from 270 billion yuan (CAD $54.2 billion) in 2015 to about 600 billion yuan (CAD $120.4 billion) in 2020.

The nation was transfixed on the competitions, with many stories from the event becoming the most trending topics across Chinese social media. The opening ceremony was not only a prestigious cultural event designed by the world-famous director Zhang Yimou, but it also became an international fashion show as Chinese netizens commented on the outfits worn by each national team. With the US team wearing Ralph Lauren, the Japanese team wearing Descente and the Chinese team wearing Anta, it was the apparel of the Canadian team, designed by Lululemon, that won some of the highest praise from viewers.

Yang Zhongxiao, Decathlon China’s Winter Sports Development Director, said that “In China, skiing is turning from a kind of extreme sports to a lifestyle, and we are optimistic that a kind of skiing culture will form in China thanks to the Winter Olympic Games.” Winning two gold medals and a silver, the Chinese freestyle skier Eileen Gu has become a worldwide phenomenon, and in many ways was the face of this year’s Olympic games as one of the most discussed athletes across the news coverage and social media. Born in San Francisco and playing for China, Eileen Gu is also the face of many top luxury brands, reinforcing her image across winter-related advertisements in addition to Olympic-related news.

The Olympic mascot Bing Dwen Dwen challenged Eileen Gu for the spotlight, as the plush Panda with a futuristic winter outfit became an international sensation of its own. While athletes were awarded a special version of the mascot with gold laurels to celebrate victories before they received their official medals, all the plush toys and merchandise associated with the mascot disappeared from the shelves. Japanese newscasters showed off their collection of Bing Dwen Dwen products while factory workers were called back early from the Spring Festival holidays to resume production. As licensed stores sold out, the waiting list for orders reached over 3 months, and prices exploded for those looking to resell the official products online.

Team China won 9 gold medals and a total of 15 medals, putting it in 3rd place, while Norway, with a population of just 5.5 million, placed 1st with a record 16 golds and a total of 36 medals. Canada ranked 11th with 4 gold and ranked 4th in the total number of medals with 26 medals.

The Nielsen Company reported that prime-time viewership on NBC and its streaming service, Peacock, was down 42 percent from the 2018 Games, but hundreds of millions of viewers in China watched the games on CCTV and a range of Chinese live-streaming platforms. The strong response in China over the games highlights the future potential for winter sports and winter tourism, as the games went from a niche market to one of the most highly discussed topics in the country. 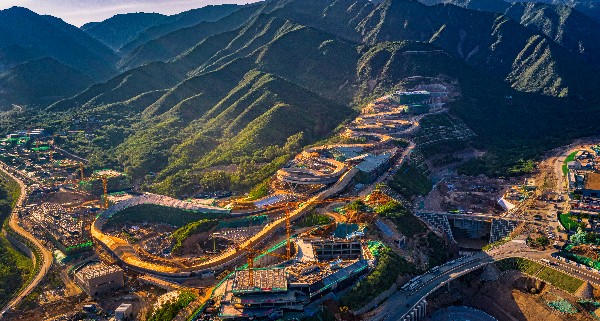 The National Sliding Centre at the 2022 Beijing Winter Olympic Games